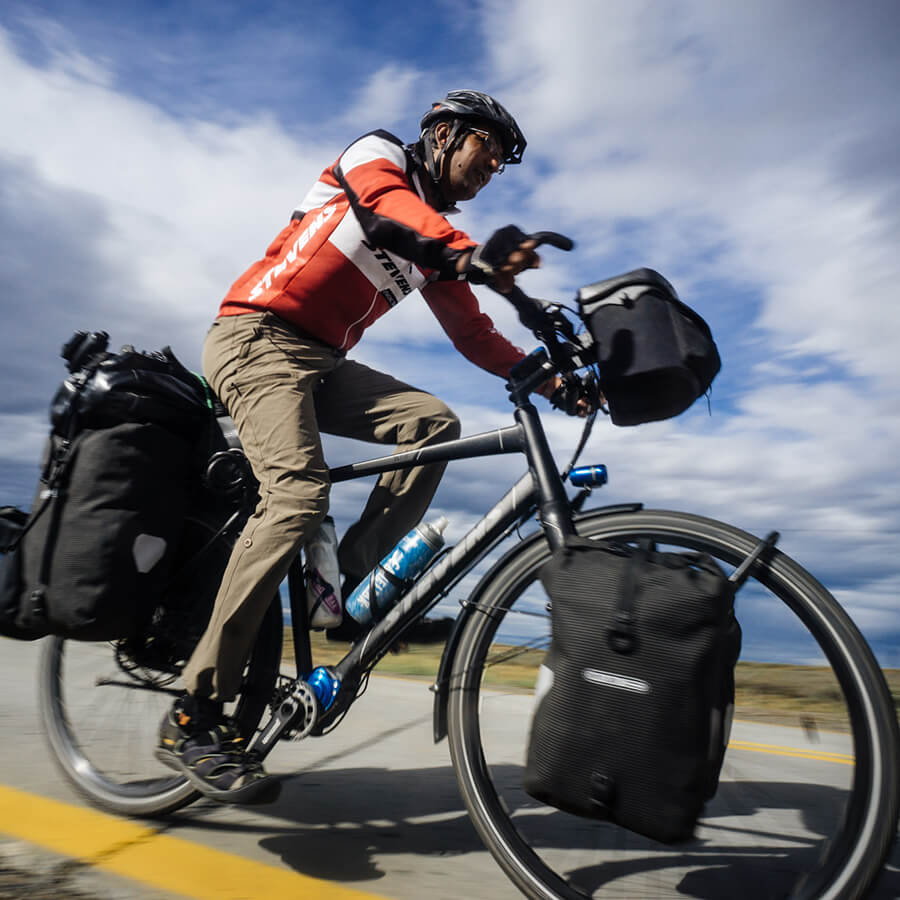 KAMRAN ALI & THE TOUR OF HIS LIFE

In January 2016, Kamran Ali sets off on the “tour of his life”. This will take him on about 30,000 kilometres from Ushuaia in southern Patagonia to Alaska – by bike. To make his dream come true, the IT specialist has quit his job and apartment in Nuremberg. Since then he has been living his dream of being on the road.

He consciously does not set a time limit for his tour, but travels according to the motto “Taking your time takes time”. He not only wants to explore nature, he wants to experience it. He seeks dialogue with the local people and takes the time to document his journey. Fascinating   pictures and captivating stories are provided by Kamran Ali on his website «Kamran on Bike».

Kamran summarizes the stops on his tour for Pinion Storys in his own words. Come along on a journey…

January 2016 to April 2017
From Ushuaia, Argentina to Necocli, Colombia

In January 2016 I set out on a 30,000 km journey from the southernmost city in the world, Ushuaia, Argentina, to one of the northernmost cities in the world, Prudhoe Bay, Alaska. Within 15 months I cycled 13,000 km, following mainly the course of the mighty Andes. I passed through six countries: Argentina, Chile, Bolivia, Peru, Ecuador and Colombia. Half of the journey, which covers the entire length of North America, is still to be completed.

The Patagonian steppe is a treeless region and known for its relentless winds. I haven’t seen any trees for about two months, and when I saw one, the wind shaped it to resemble a flagpole. The locals call Patagonia “Escoba de Dios”, the broom of God, because of its persistent wind that sweeps everything away.

After having cycled the last months in the Atacama Desert and the dry Altiplano, I could literally feel the humidity in the air and the smell of the vegetation during my ride on the death road (El Camino de la Muerte), also known as the most dangerous road in the world, near La Paz in Bolivia. Lush mountains were surrounded by clouds. I had the feeling that I could almost touch the mountains. The magnificent views filled my eyes and reached deep into my soul. I was all alone. Did nature create all this for me? How long have these mountains waited to see me? I felt very special and humble… 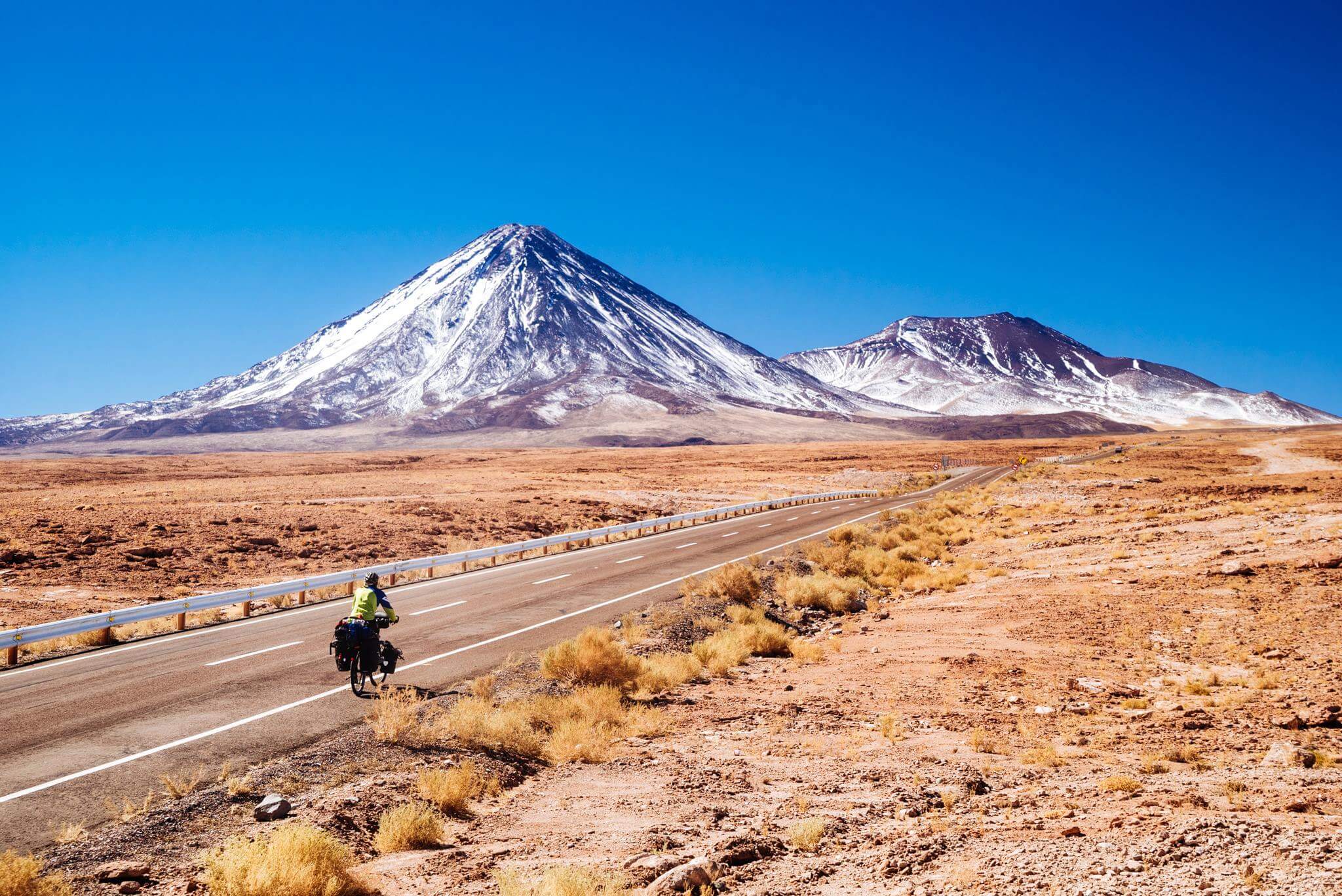 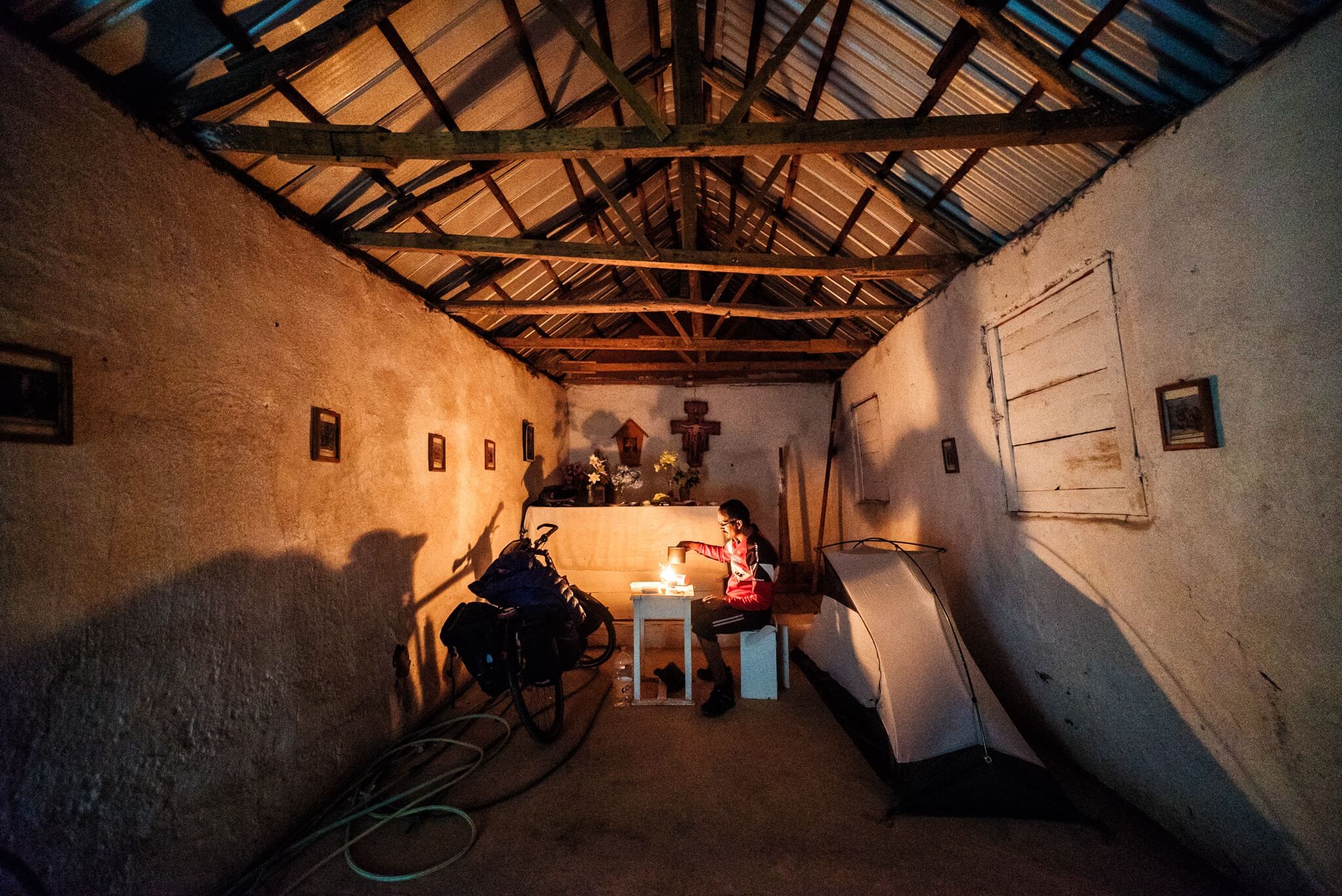 June 2016 Cachiyuyo, Chile: In a dry valley in the Atacama Desert, I went from one road to another in search of shelter to spend the night. In the end I found a chapel and got permission to pitch my tent. 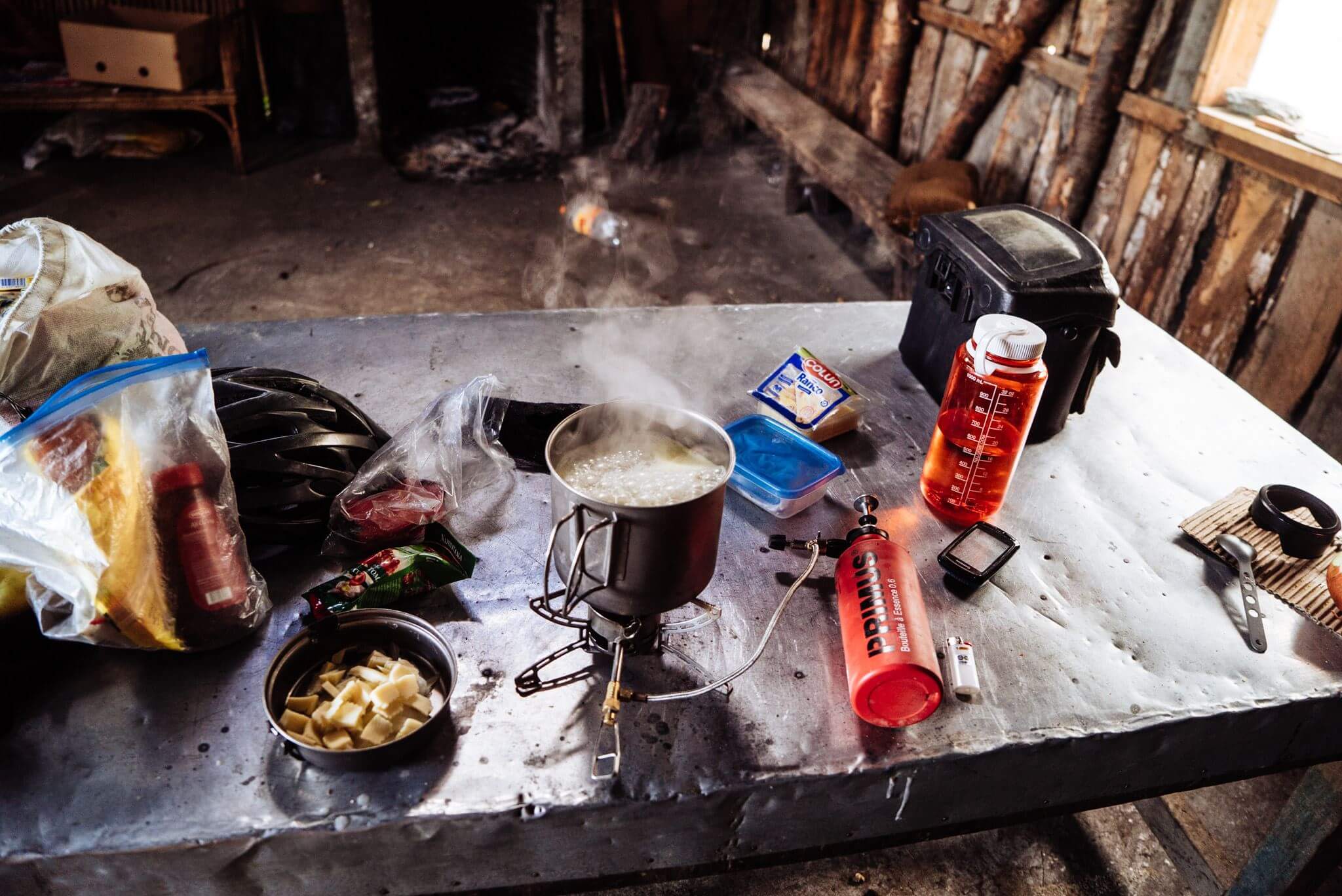 July 2016, Chile: Tonight I made a big portion of pasta with cheese and went to bed early. It was a very cold evening. 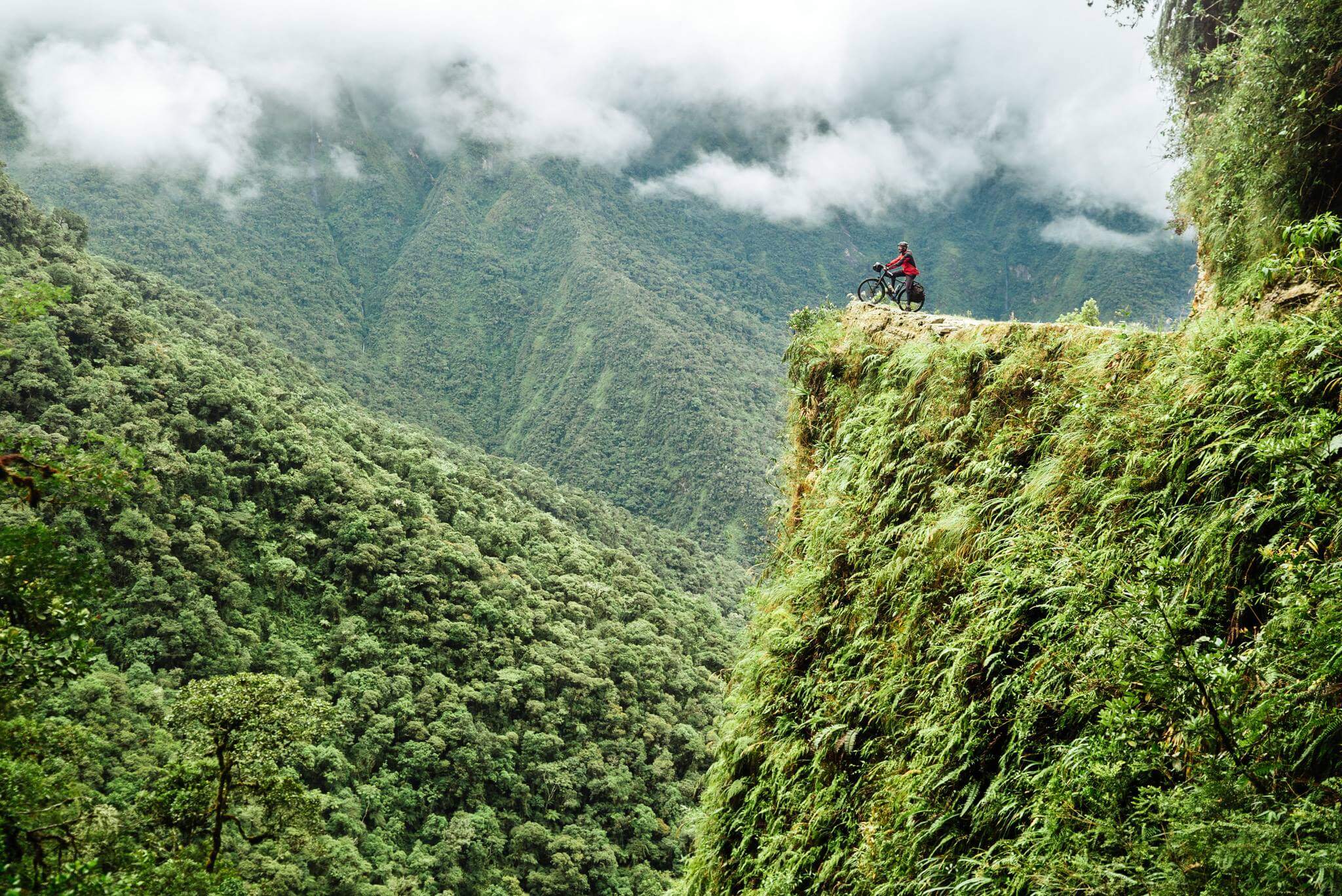 August 2016, Bolivia: Cycling the death road in Bolivia which is dubbed as the world’s most dangerous road. A 2006 study estimated that 200-300 people were killed on this road every year. About 18 cyclists have died here since 1998. 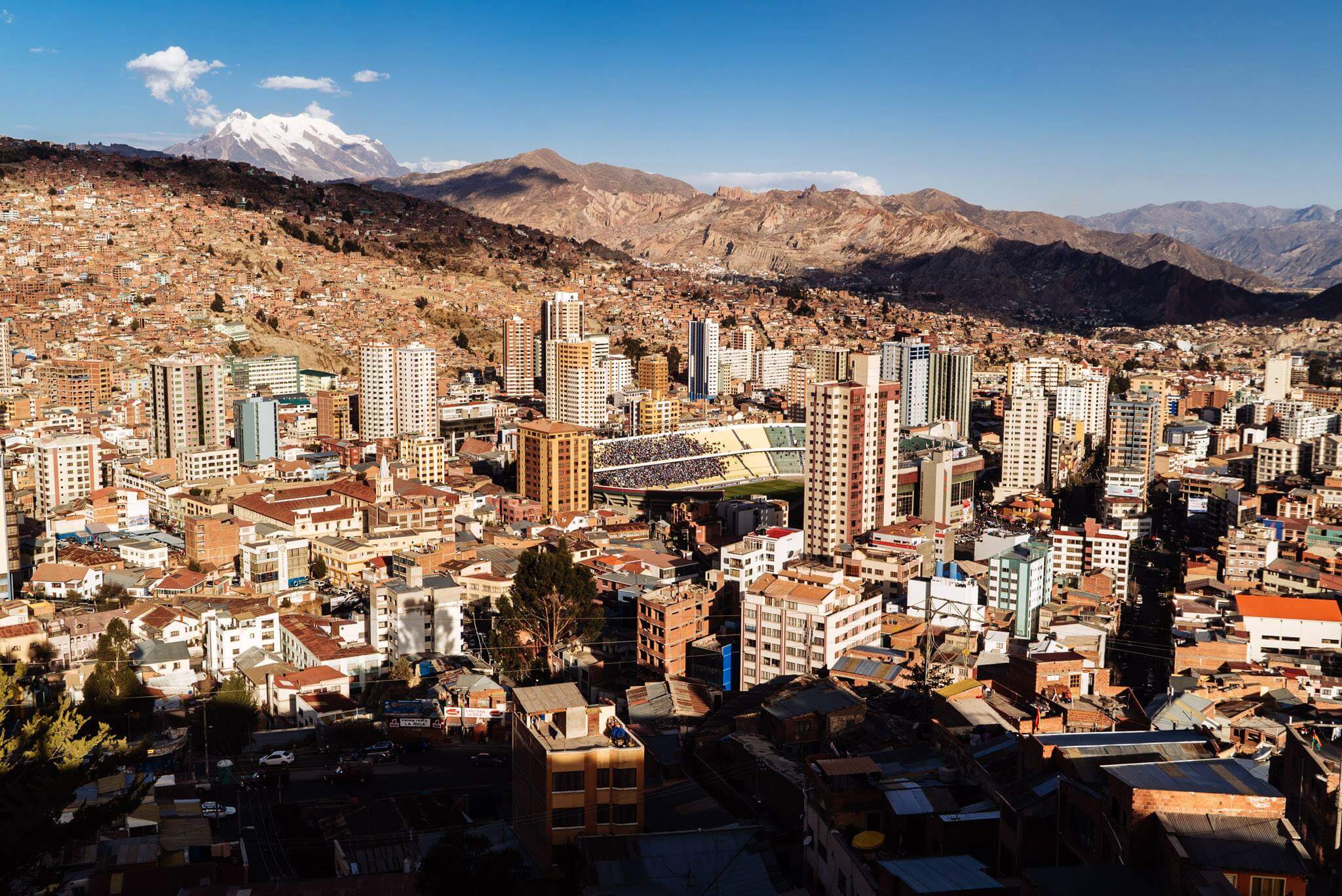 August 2016 La Paz, Bolivia: The view of the city of La Paz seen from the Mirador Killi Killi. In the middle you can see the Estadio Hernando Siles football stadium, which is the highest professional football pitch in the world. In the distance you can see the three-pointed mountain Illimani (6402 m), which is located southeast of La Paz. 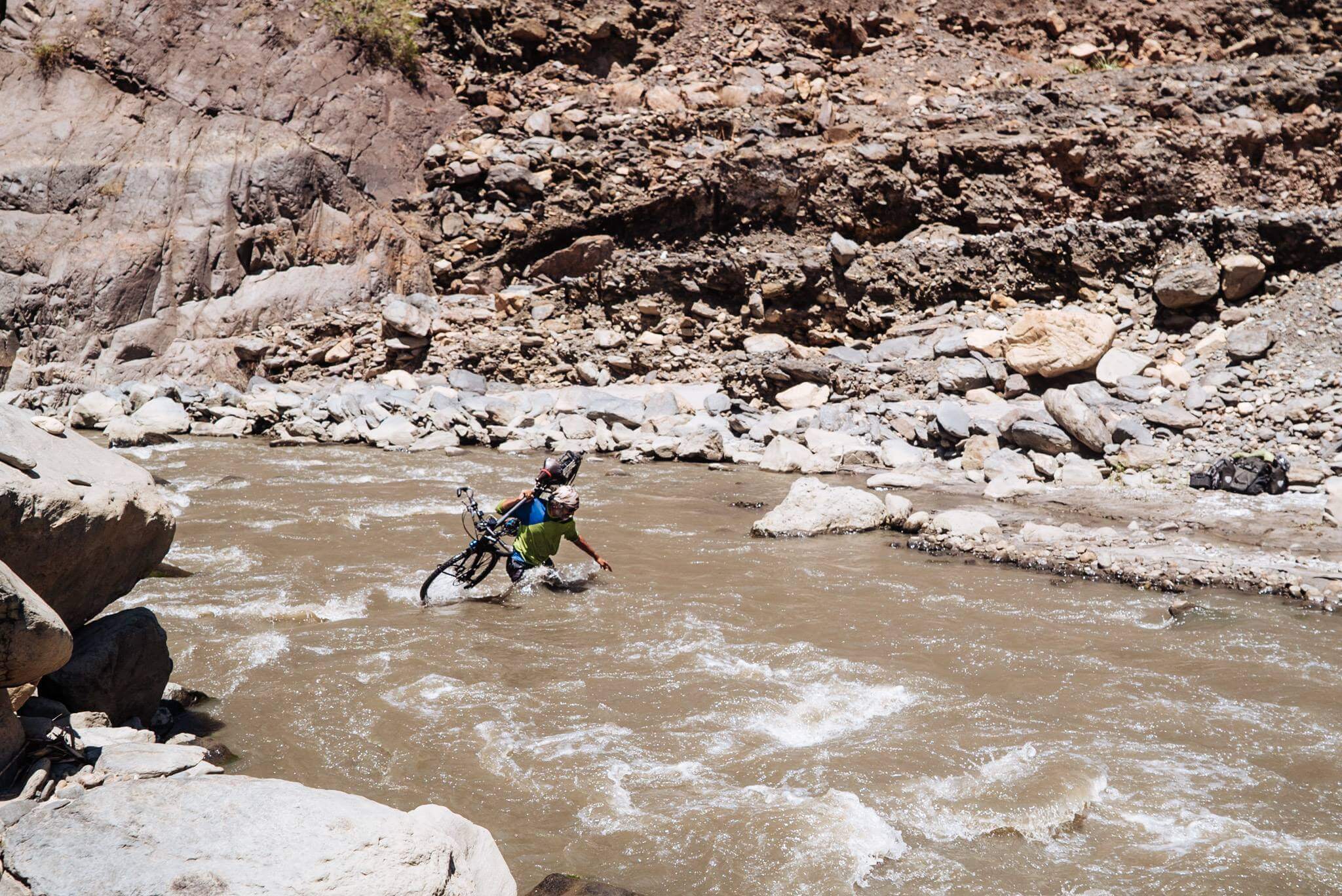 October 2016, Peru: Luckily I managed to stand up on both legs and get to the other side safely by bike. It was the most adventurous water crossing I have ever made by bicycle. My left knee was bruised and for the next week I was in a lot of pain. 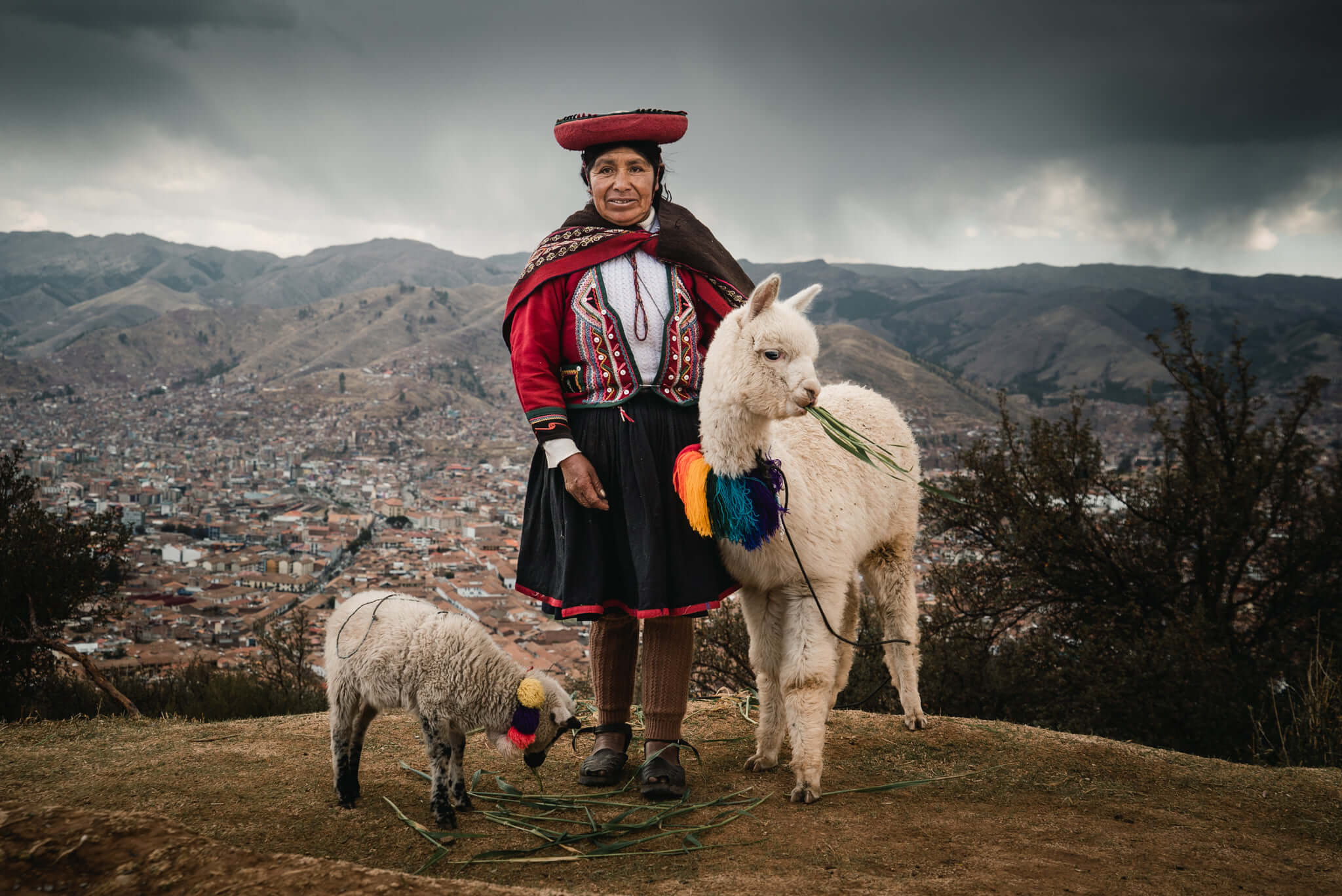 “FOR ME, THE SYSTEM IS PERFECT. THE WEIGHT IS IN THE CENTER, ALL THE TECHNOLOGY IS ENCAPSULATED AND WELL PROTECTED.”

April 2017 to February 2018
Through Central America and Mexico

The entry from Colombia to Panama was a challenge for me. The Darien National Park, in the south of Panama, the road ends in the bushland. The protected area is a UNESCO World Natural Heritage Site because of its unexplored and rare plants and animals. The Panamericana only continues after almost 100 kilometres in Colombia. This gap, called “Darien Gap”, is the transition from Central to South America. I decided to take the ferry.

During the next 10 months I cycled 8,000 km through Panama, Costa Rica, Nicaragua, Honduras, El Salvador, Guatemala, Belize and Mexico to the border of the US. These months were characterized by tropical heat and seemingly endless kilometers over burning asphalt. All this was demanding and cost me strength. The border crossing between Belize and Mexico is on a river bridge. I rubbed my eyes when I saw the sign “Welcome to Mexico” on the bridge. It had taken me about 20 months by bicycle to get here, so I stopped at this landmark to capture this historic moment. At that point I didn’t realize that it would take me almost half a year to cycle 4,500 km through Mexico… 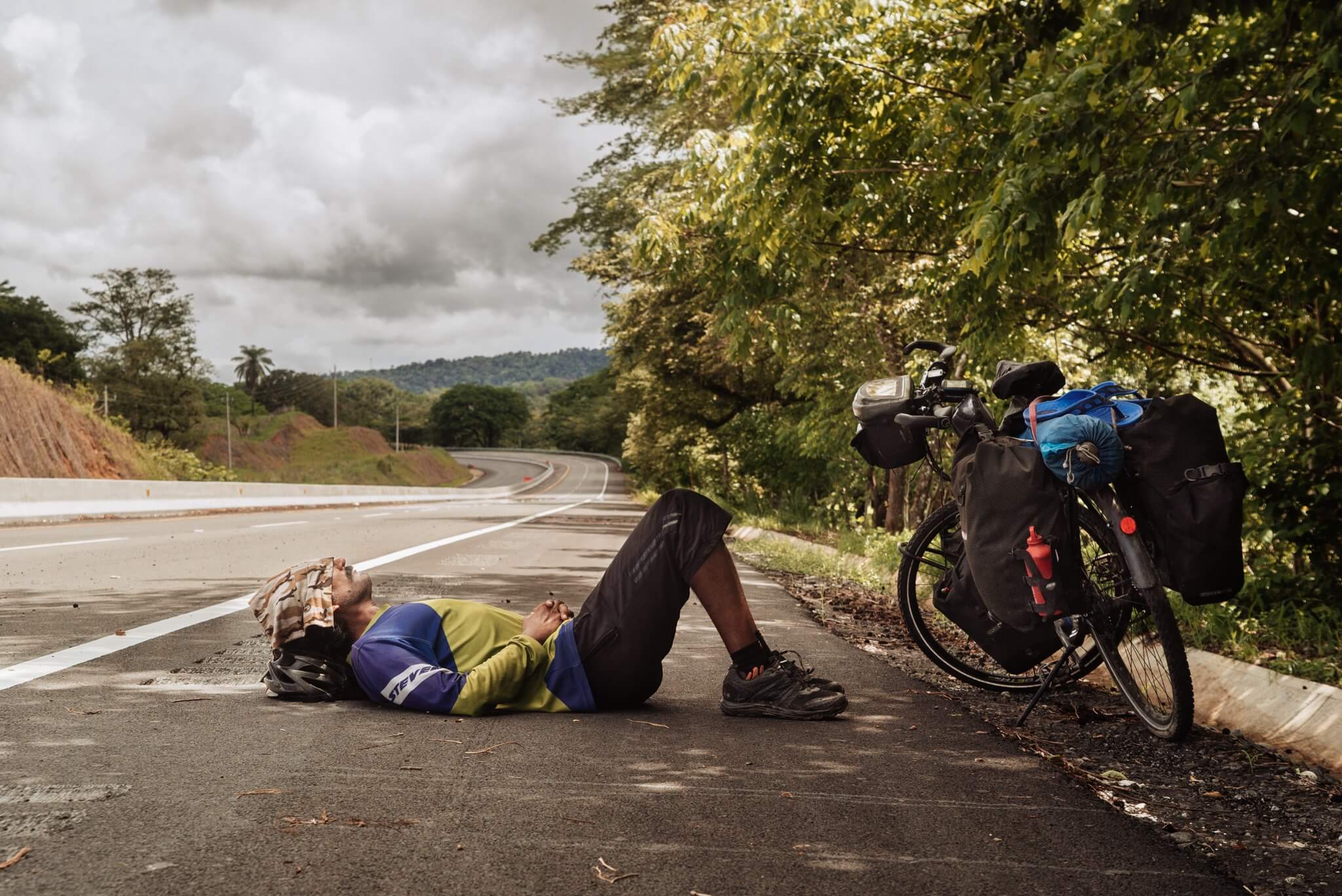 May 2017, Panama: The asphalt on the Panamericana Highway melted under my tyres in the tropical heat. 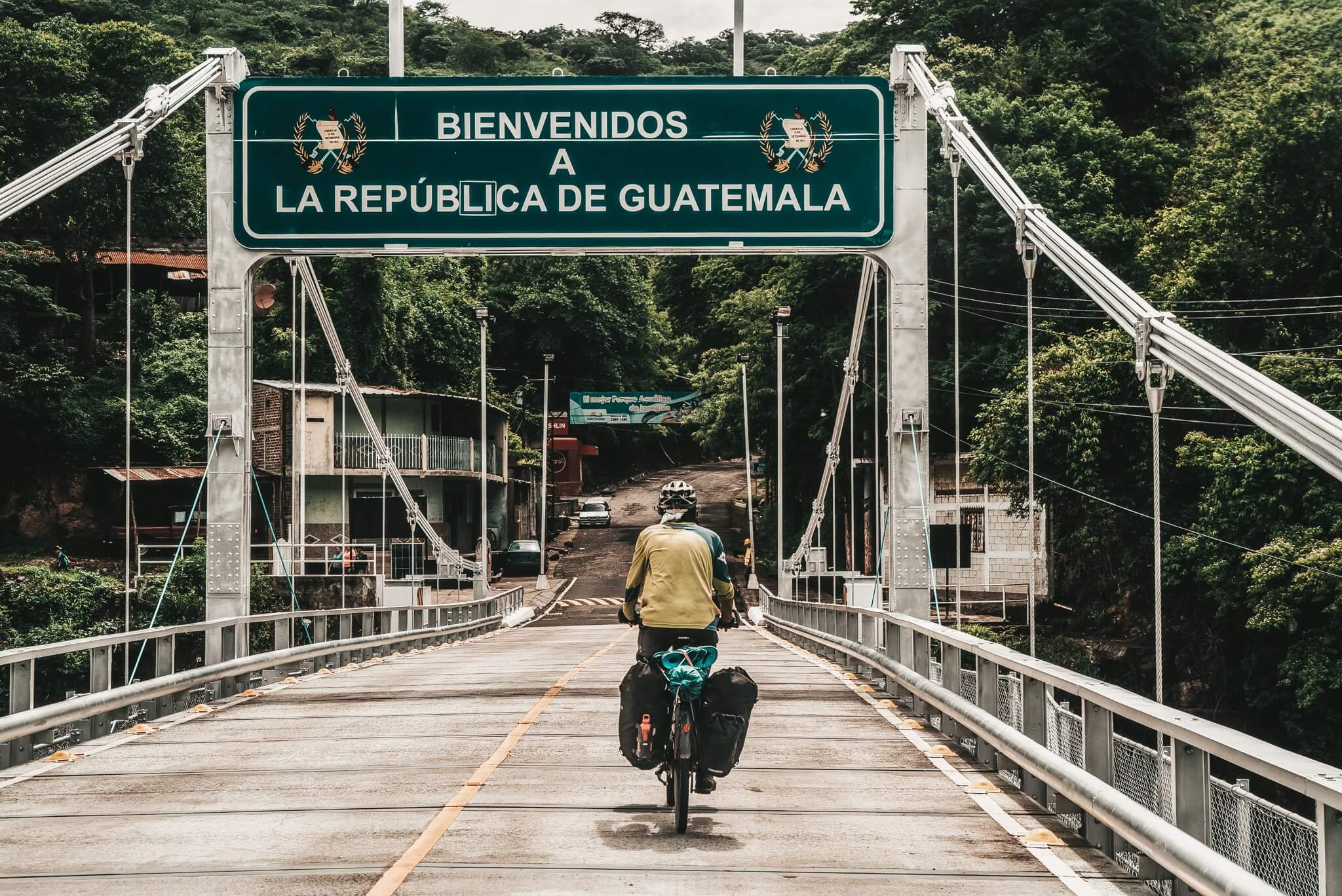 July 2017, Entering Guatemala: After about 50 km from Santa Ana in El Salvador I reached the border to Guatemala. The border crossing was very easy. Apart from waiting due to a long queue, the entry did not take longer than one minute. 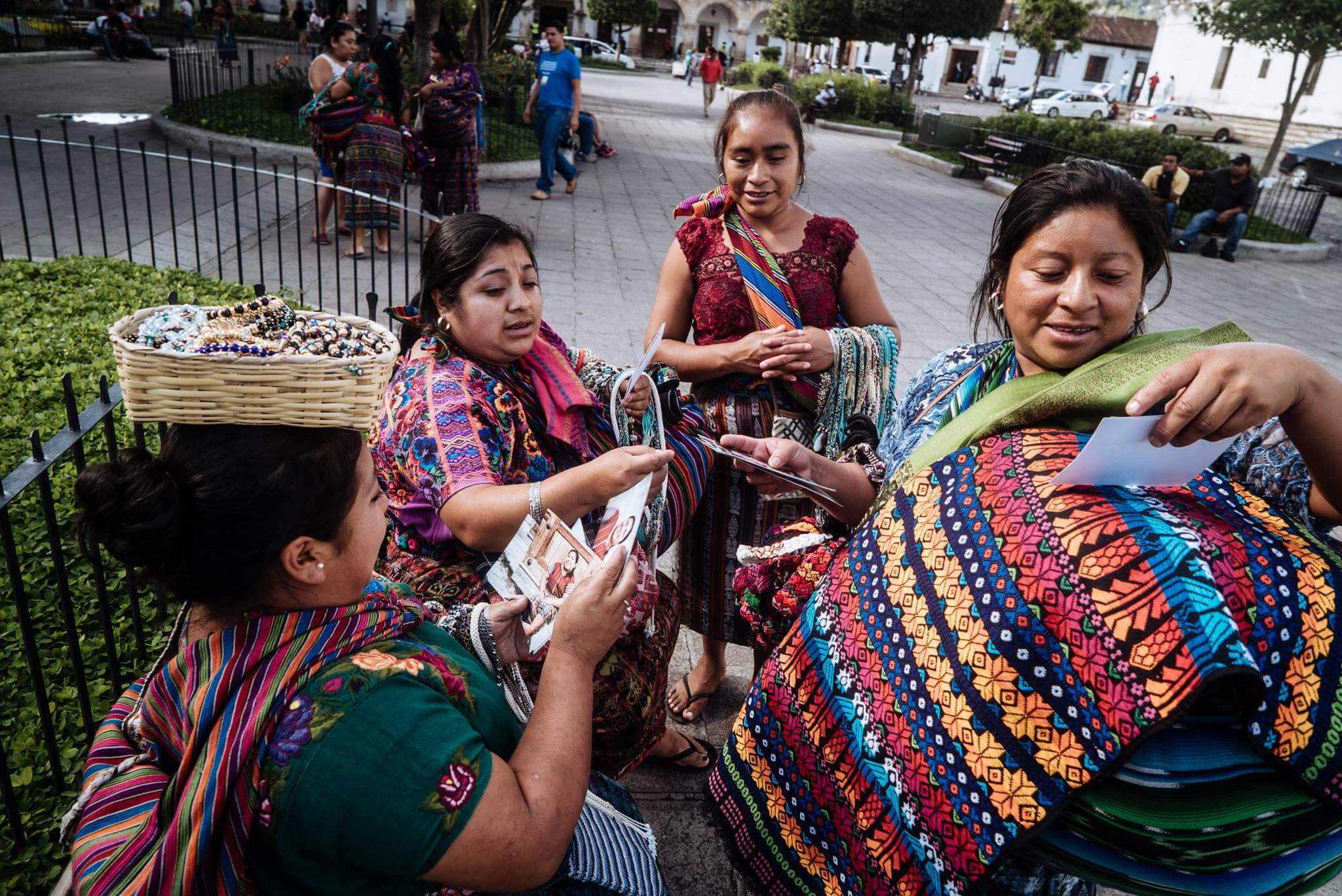 July 2017, Antigua Guatemala: I spent several afternoons with the souvenir merchants on the Central Plaza of Antigua and took many pictures of them. Then I printed out the photos and returned to the Central Plaza to hand-over the pictures to them. 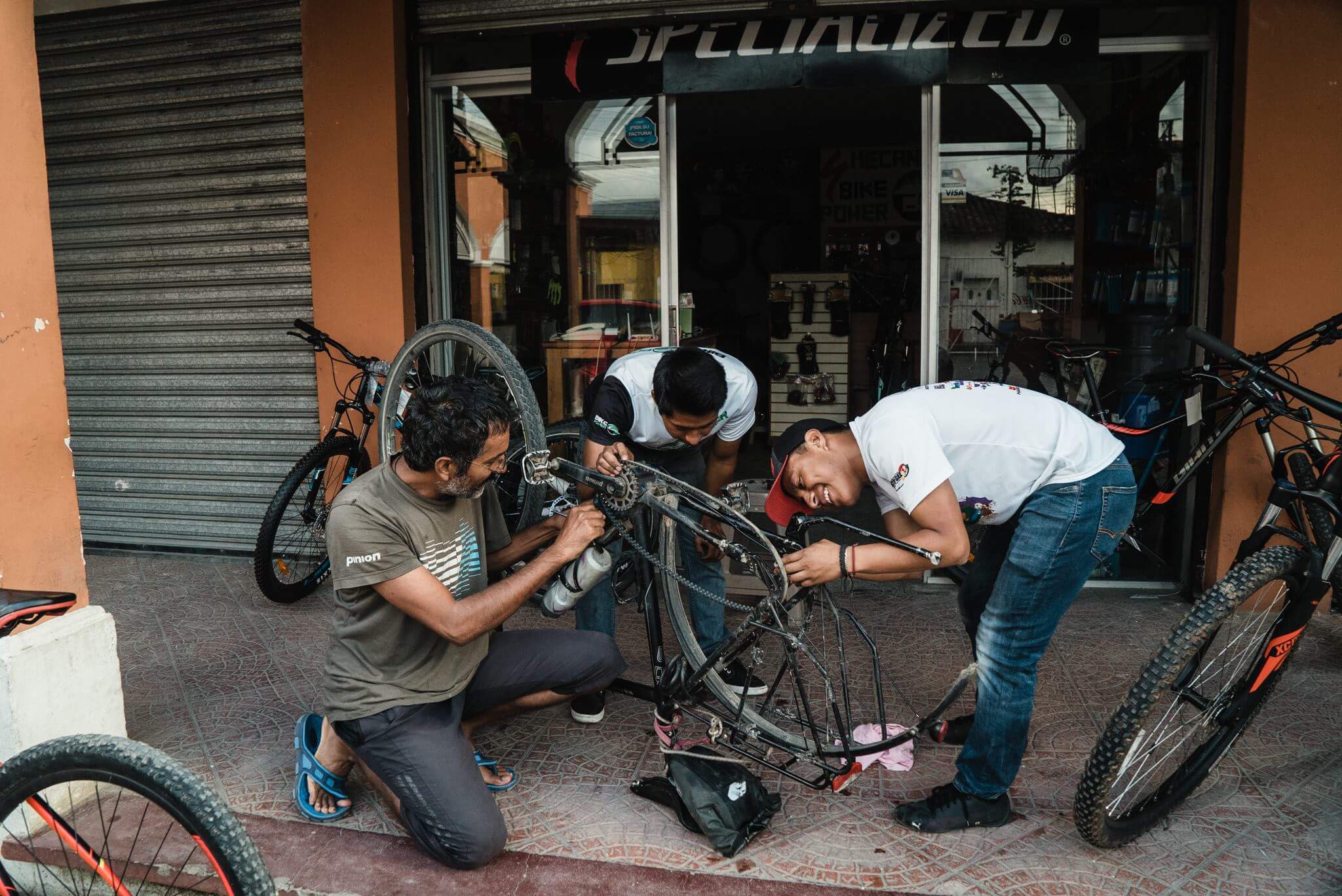 July 2017, Guatemala: In Quiche I went to a proper bike shop to have the rear brakes checked. 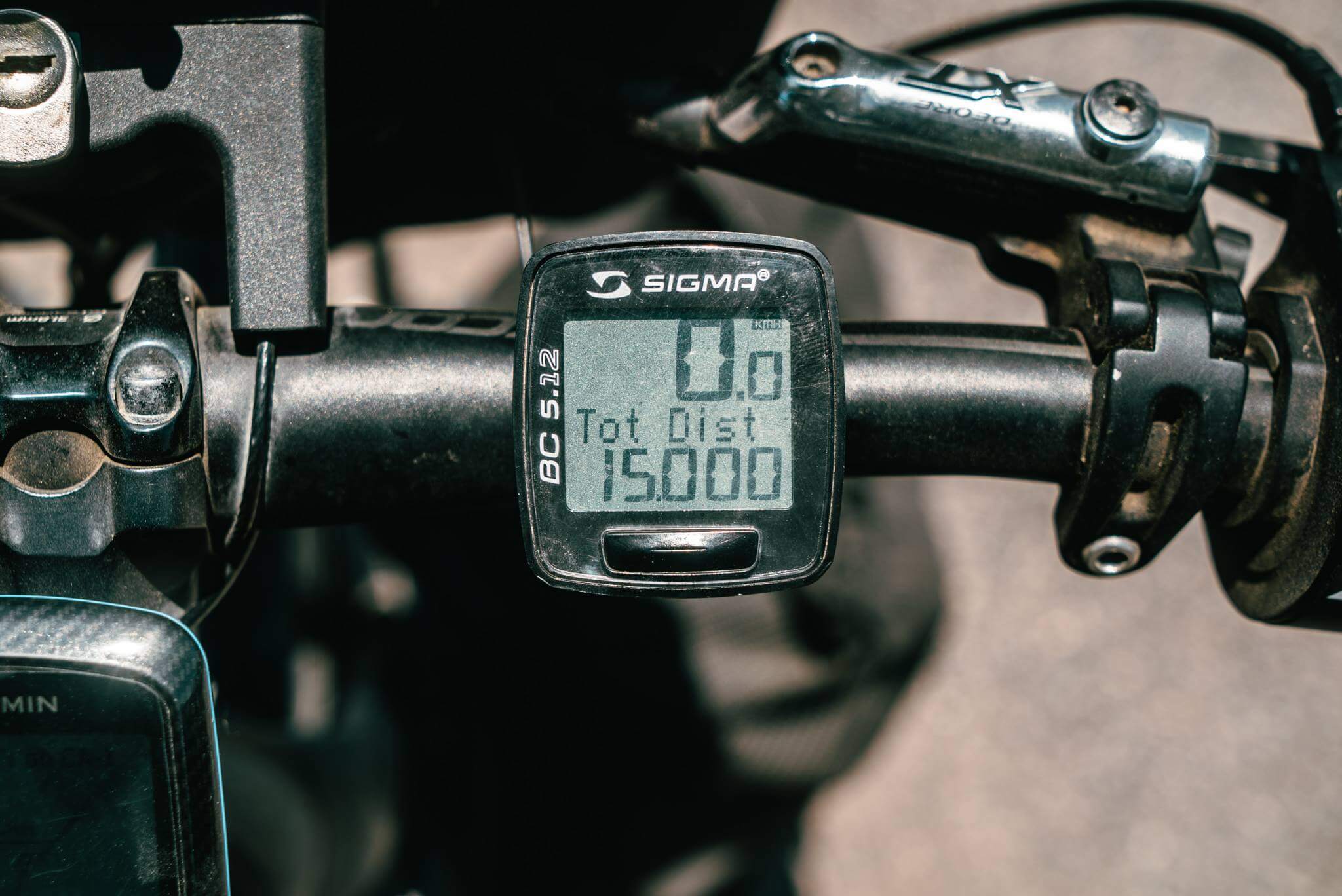 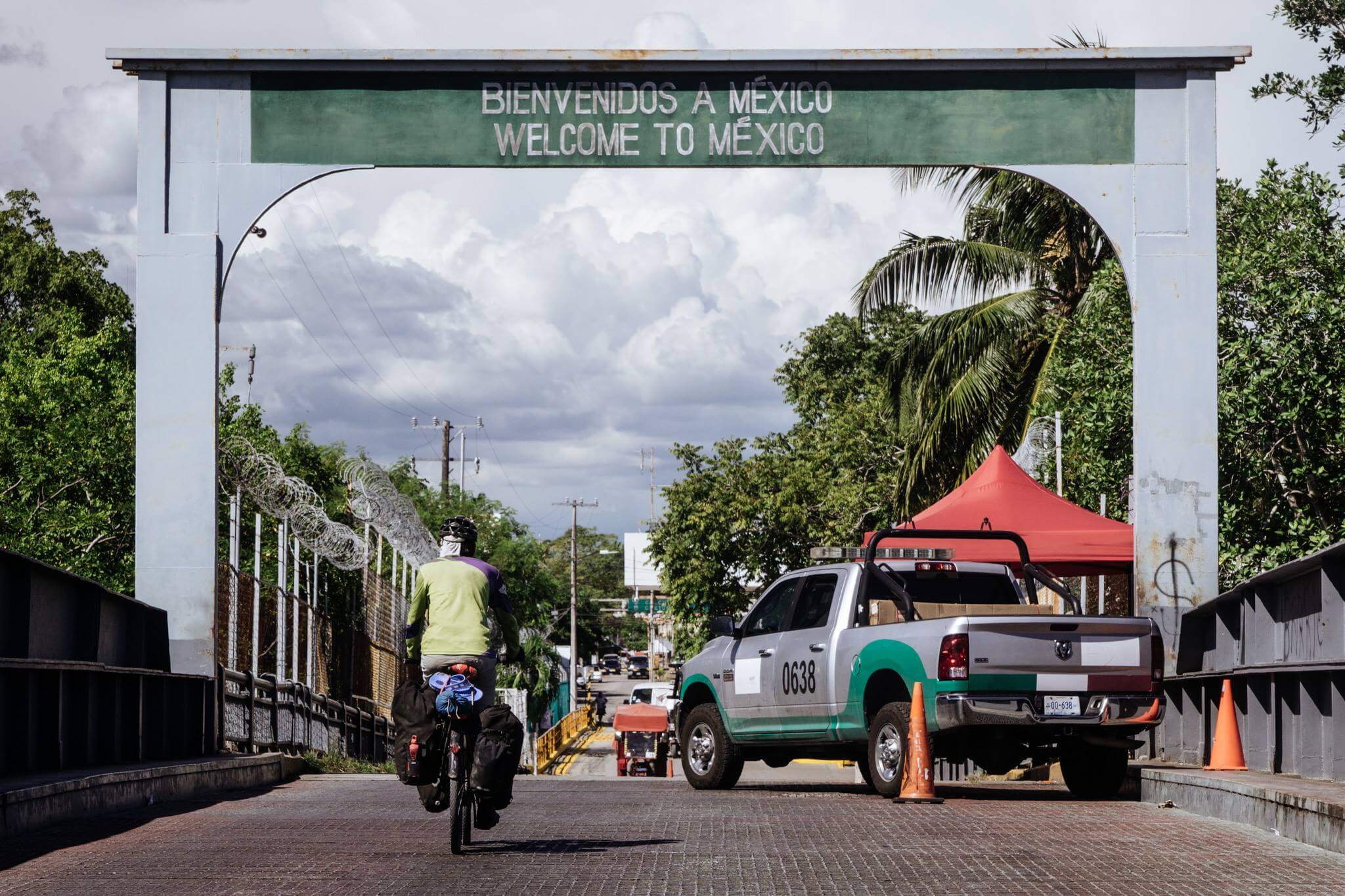 February 2018, Mexican border: After 20 months in the saddle I reached Mexico that day. 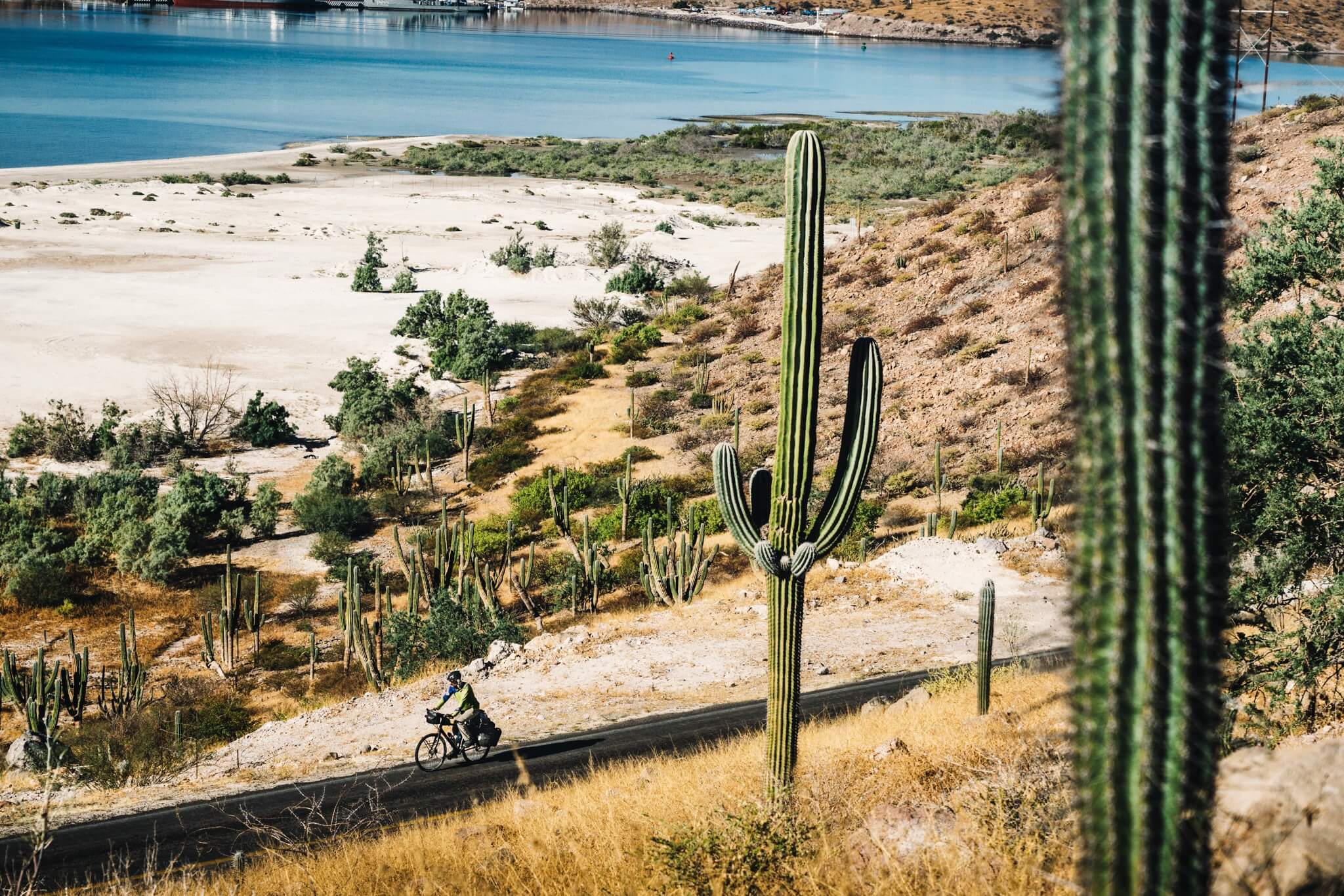 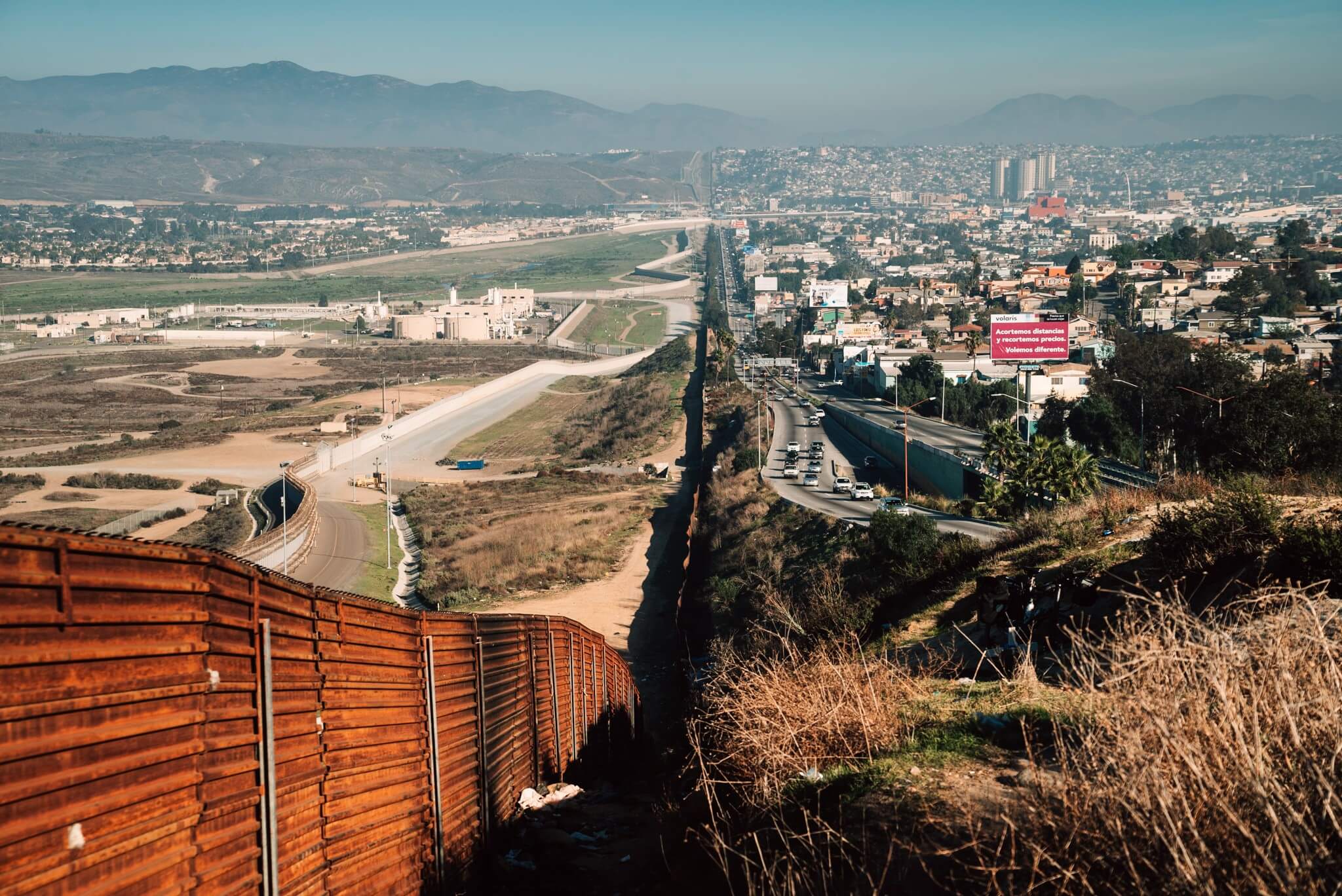 February 2018, Tijuana Mexico: I took a look at the rusted plates. The color of the sky and the texture of the land was the same on the other side, the air smelled the same, the same river flowed on both sides, and yet the wall divided the land in half. I looked to the right and saw a straight line stretching to the horizon. From above the wall looked like an ugly scar on the surface of the earth. 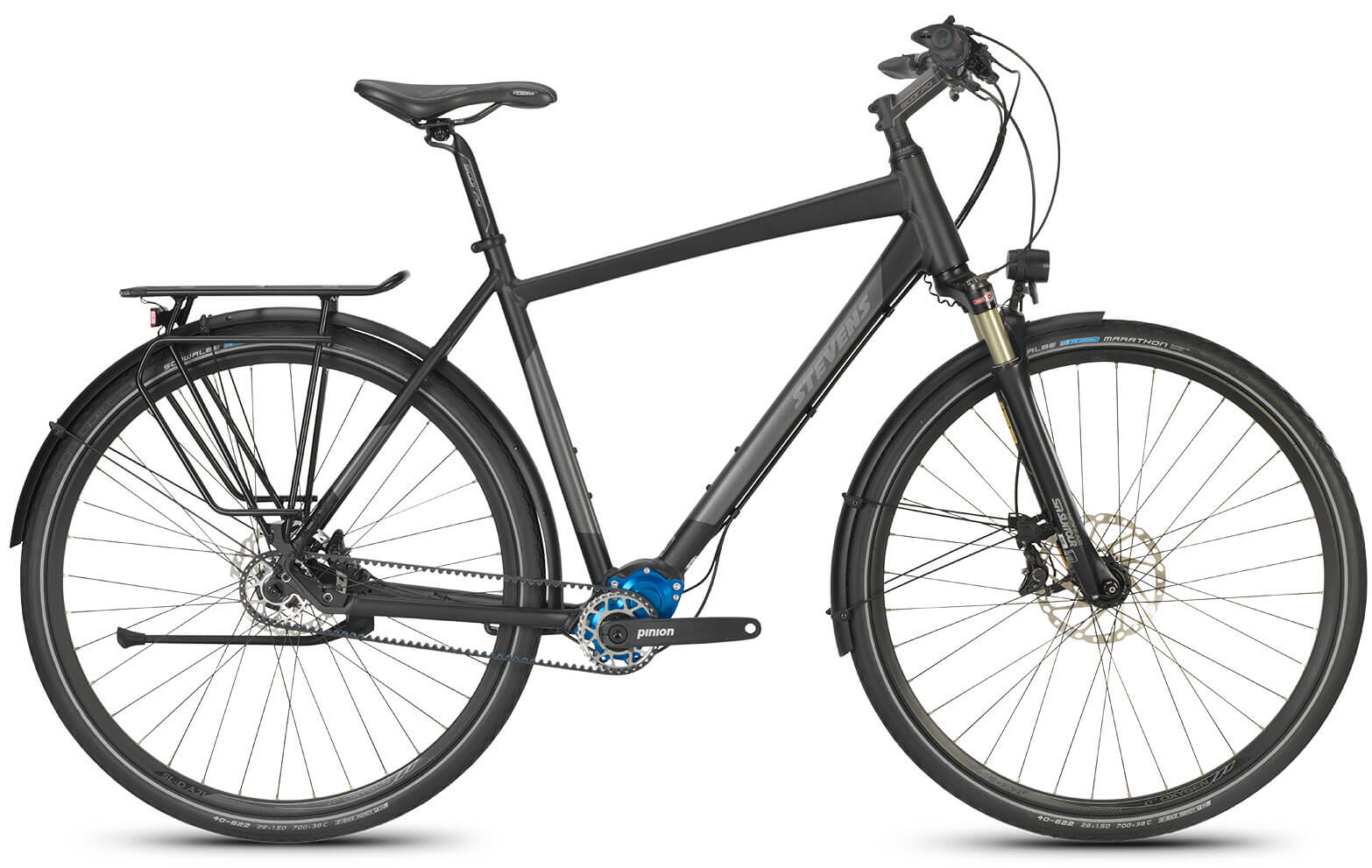 “The material must withstand quite a lot, so I was looking for something maintenance-free. The Stevens P18 Lite with Pinion gearbox and Gates belt drive instead of chain is the perfect choice!”

“I DON’T HAVE TO WORRY ABOUT ANYTHING. THE GEARSHIFT WORKS PERFECTLY EVEN AFTER 25,000 KM.”

When I entered the USA in February, my plan was to take the coastal route and make it to Alaska this summer. But I changed my plans. So I took a much longer overland route through the USA and now travel like a hiker, here and there aimlessly back and forth. I decided to take a winter break in Canada to recharge my batteries and then make it to the end…

I am often asked what is the most beautiful place I have visited by bike since I left Ushuaia. It is a very difficult question to answer because there have been so many impressive places on this journey, which began two years and eight months ago and is still continuing. To come back to the question: When I close my eyes and try to remember the most beautiful places I have cycled, I see these images pass me by: In Patagonia, the Altiplano and the Death Road in Bolivia, the Great Divide in Peru, the Atacama Desert in Chile and the Yellowstone National Park in the USA. At the moment I also see a picture of the Canadian Rocky Mountains. I don’t know what paradise in the sky looks like, but this region is definitely a paradise on earth, even if the real paradise could be a bit warmer. There are very few places I would like to return to. The Canadian Rocky Mountains would be one of them.

These days I ride for hours and to get on well towards the north. But the desire to reach my destination decreases the closer I get… 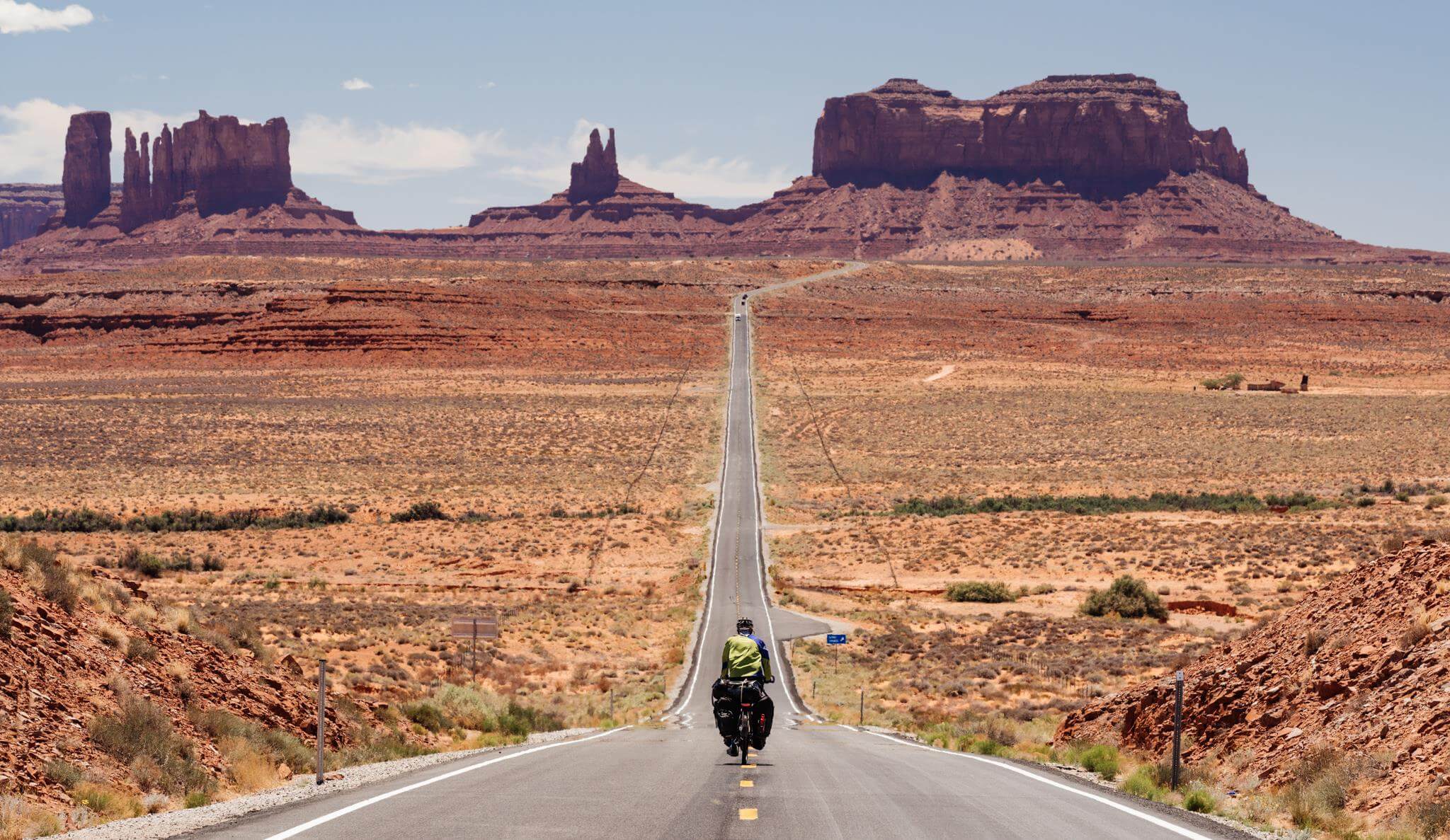 June 2018, USA: In Monument Valley, a group of sandstone cliffs and mesas tower above the Colorado Plateau. A long road stretches into the distance like a straight line on sandpaper. 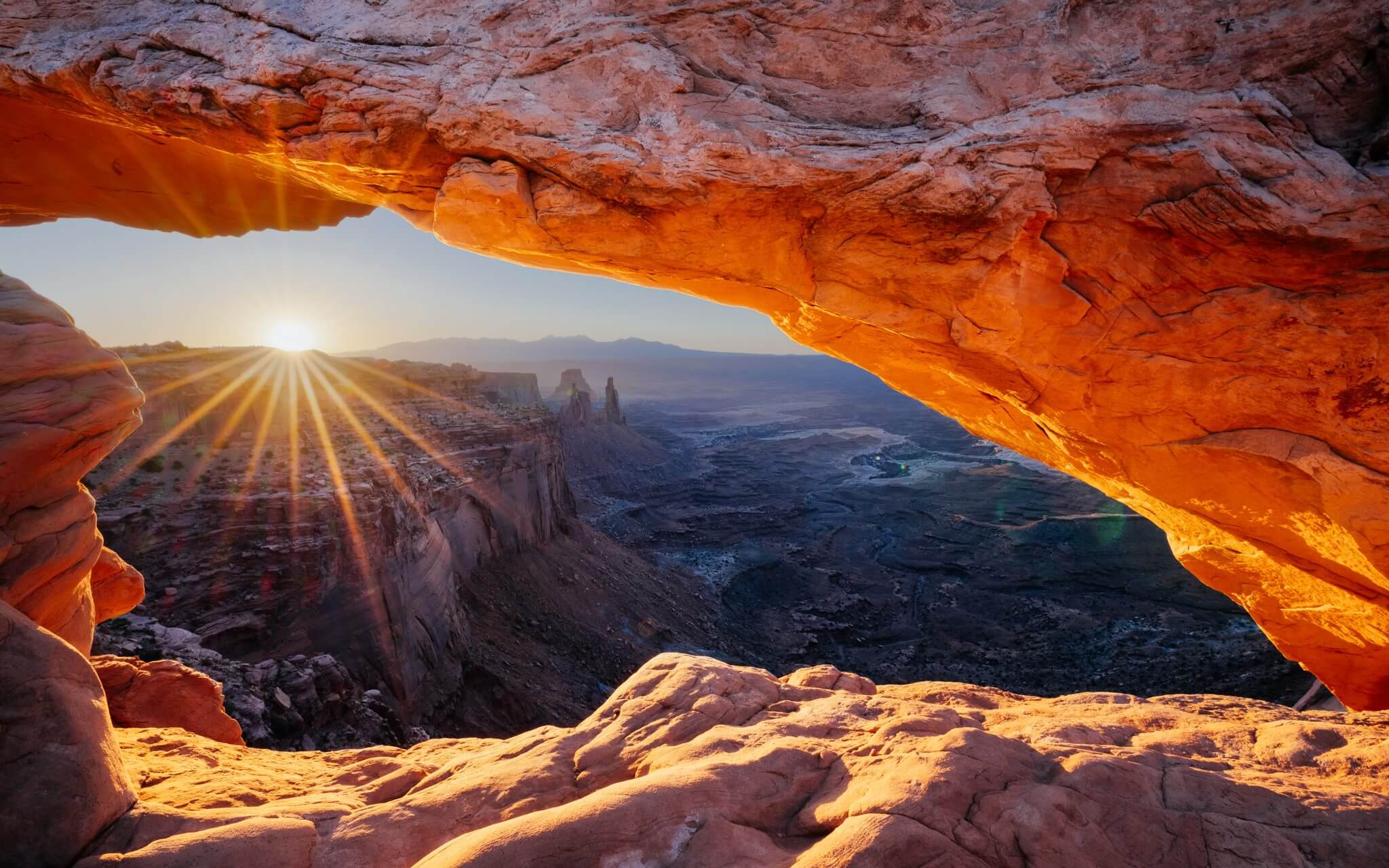 June 2018, USA: It was 4:00 in the morning. The Milky Way made a gigantic arc over the Mesa Arch in Canyonlands National Park in Utah. 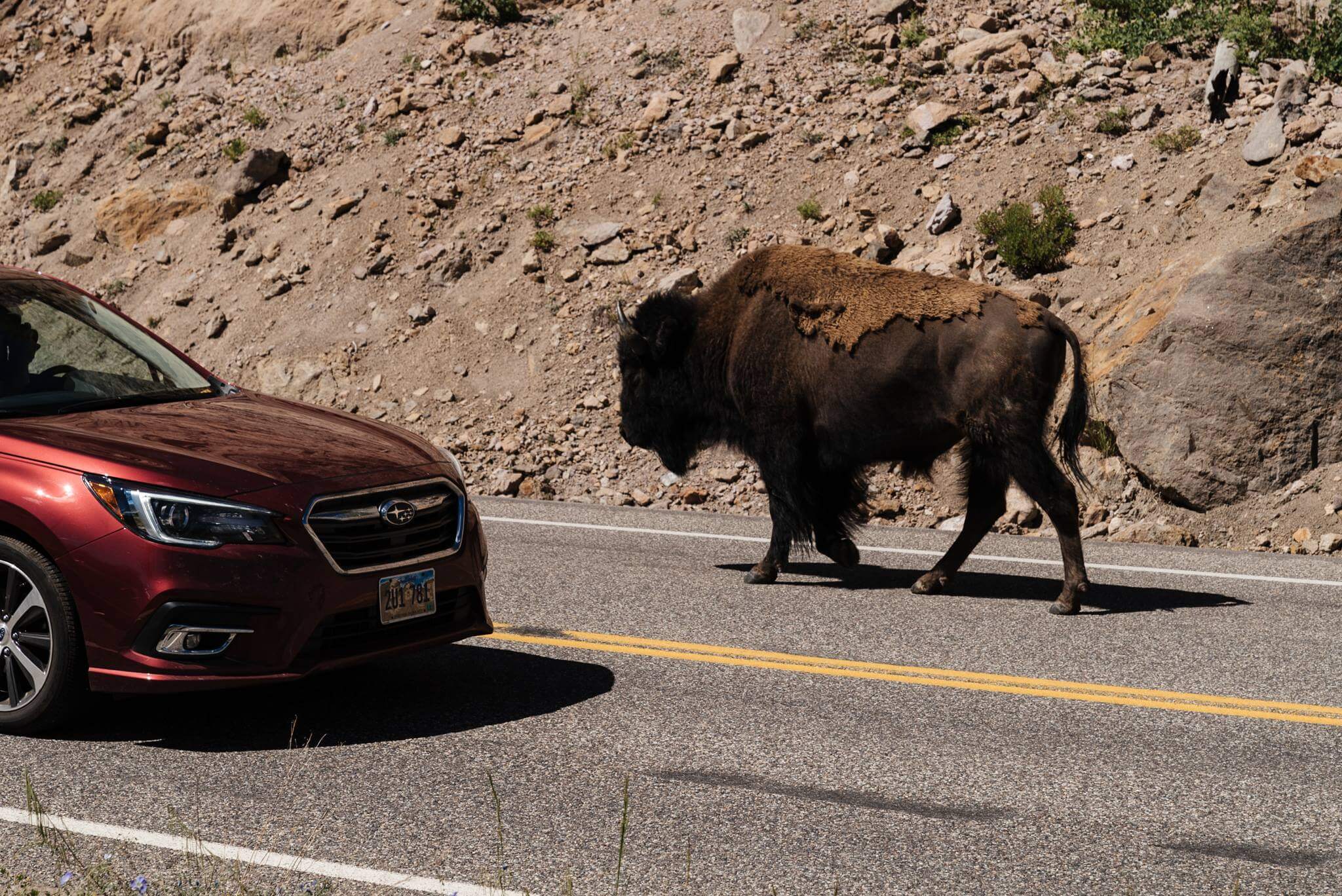 August 2018, USA: A young bison sharing the road with the traffic at Yellowstone National Park. 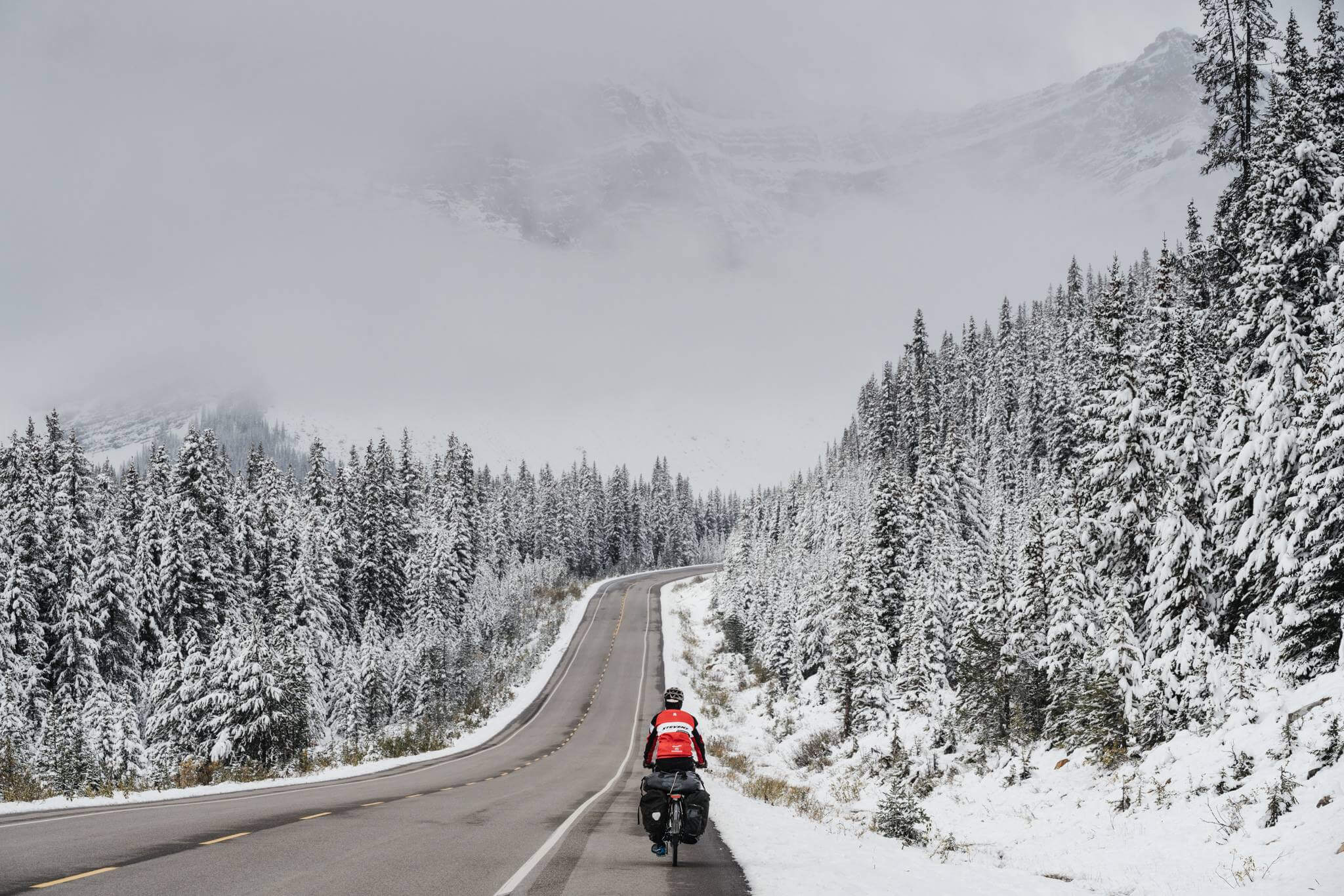 September 2018, Banff National Park Canada: The summer in Alberta was over. Two days later I found myself on my bike with rain and cold wind 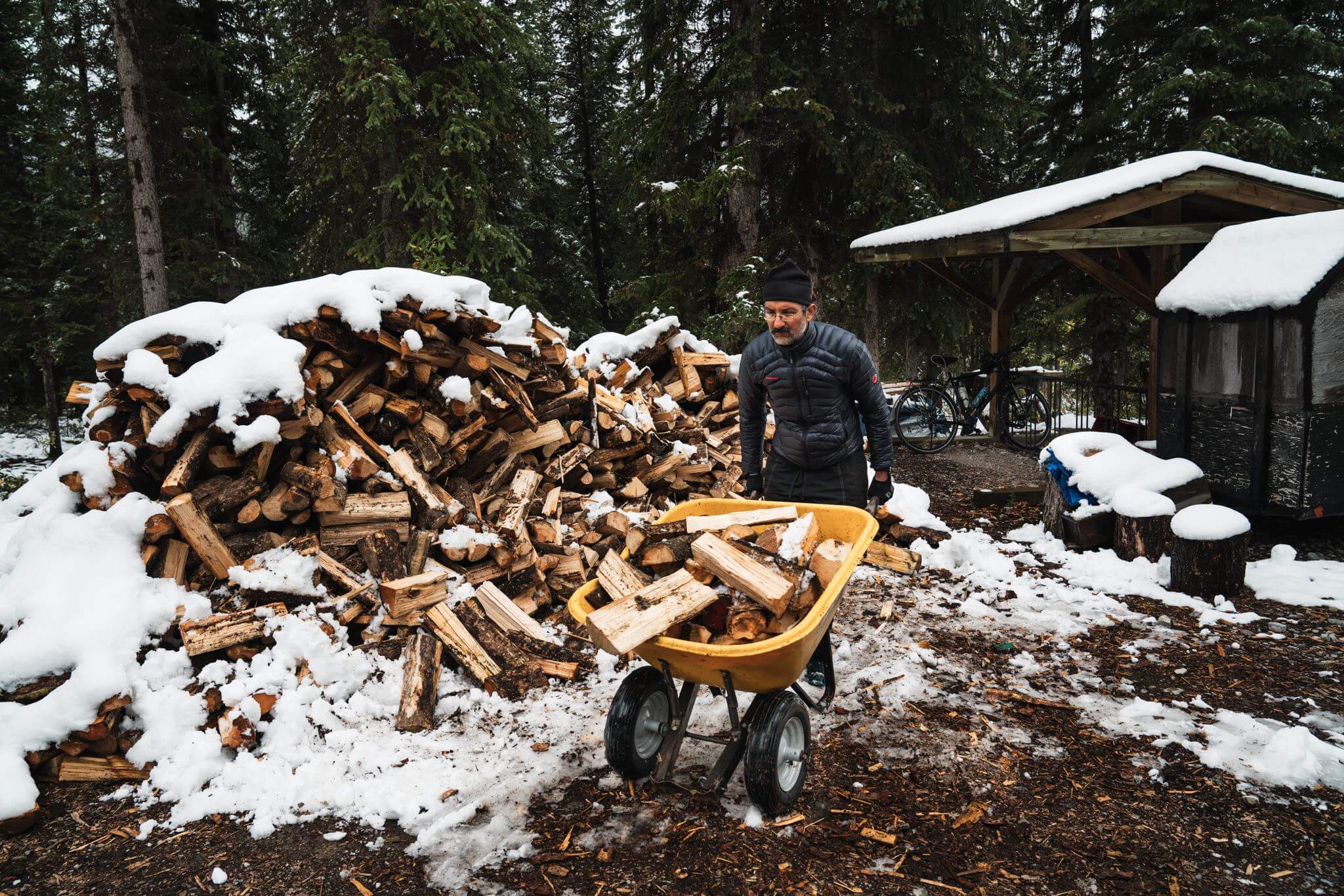 October 2018, Canada: I worked at the hostel in Rampart Creek for two nights. 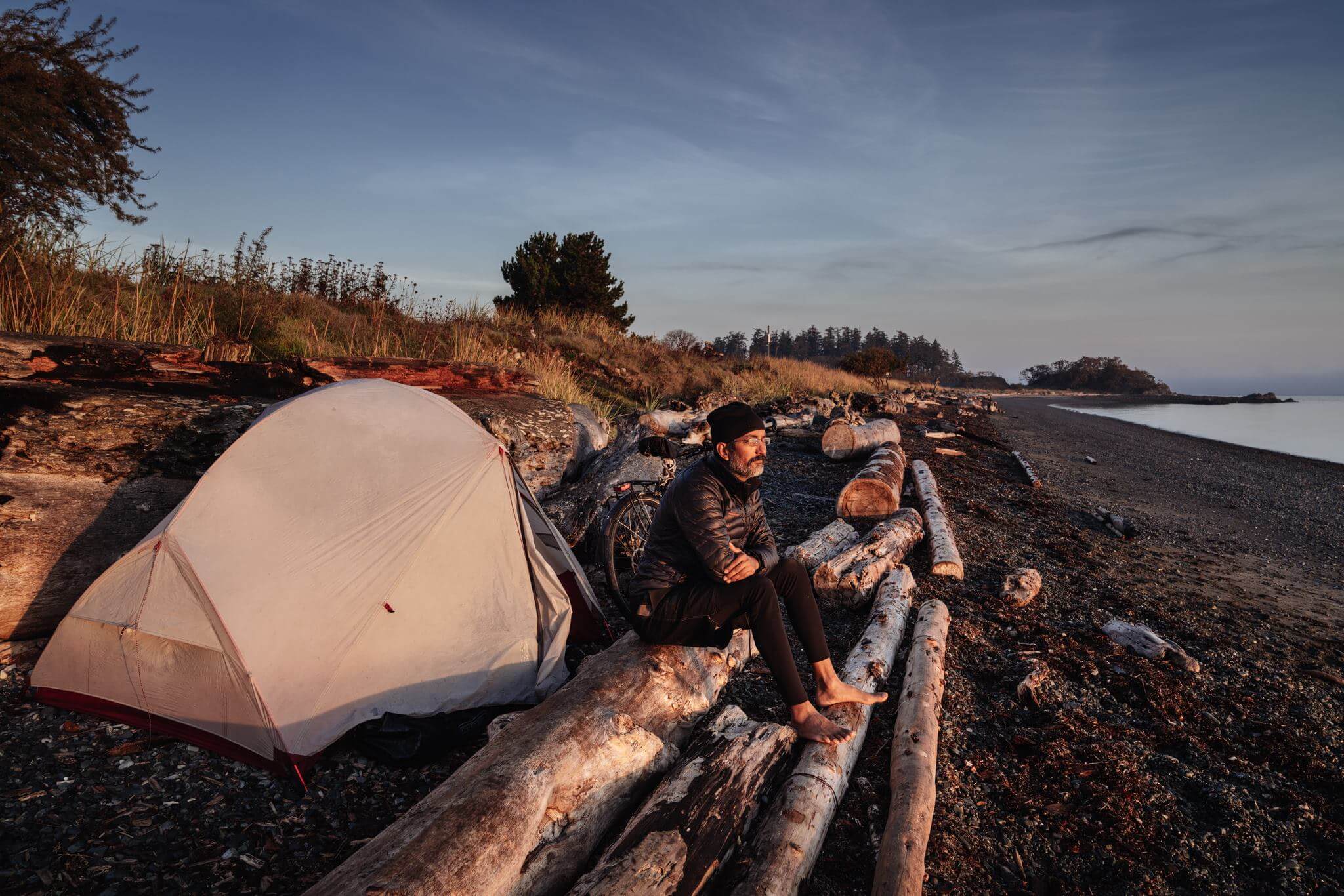 October 2018, Canada: Waking up in the sun on Naniamo beach on Vancouver Island. 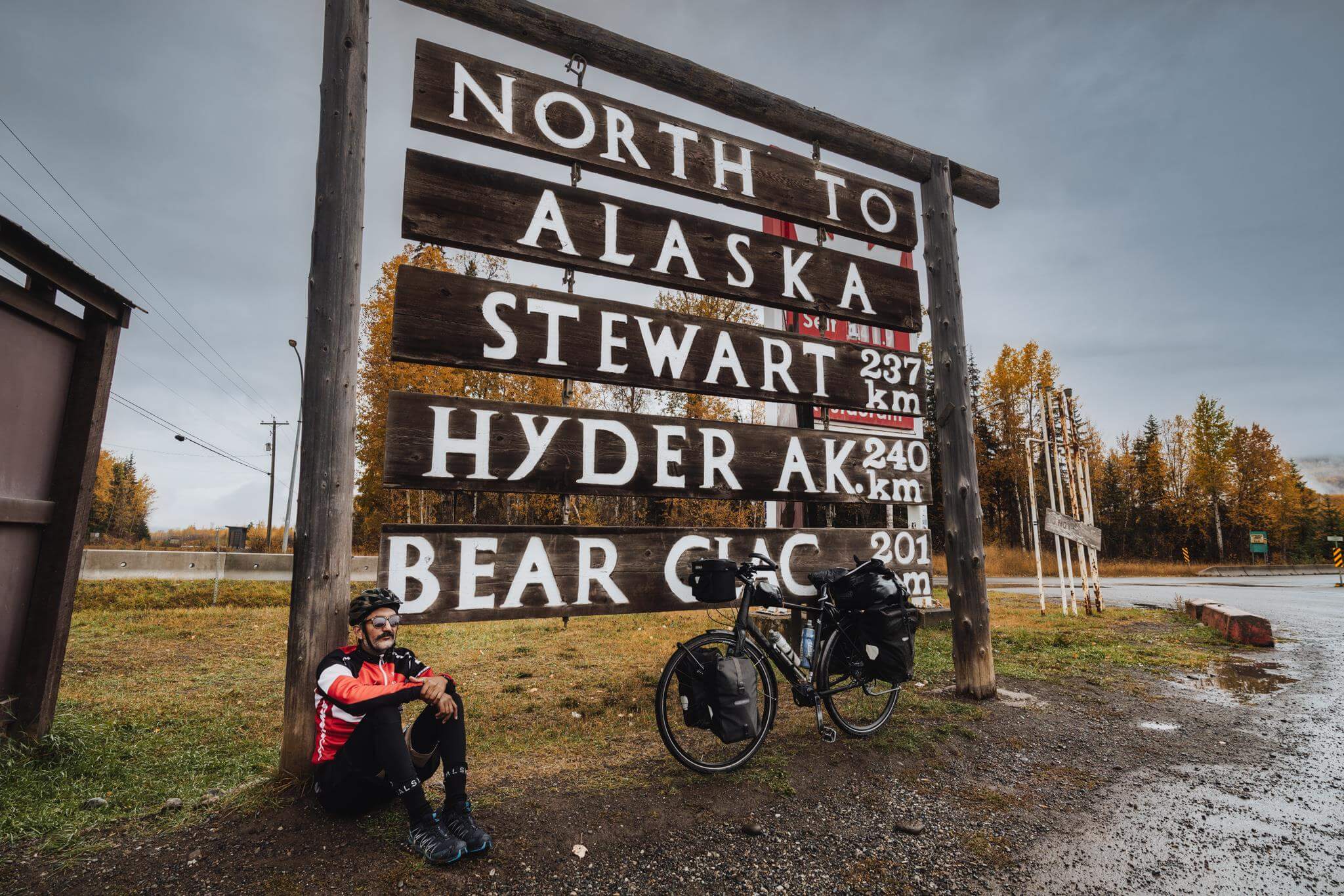 April 2019, Canada: After a six month winter break in Canada, I am ready to resume my tour to Alaska. 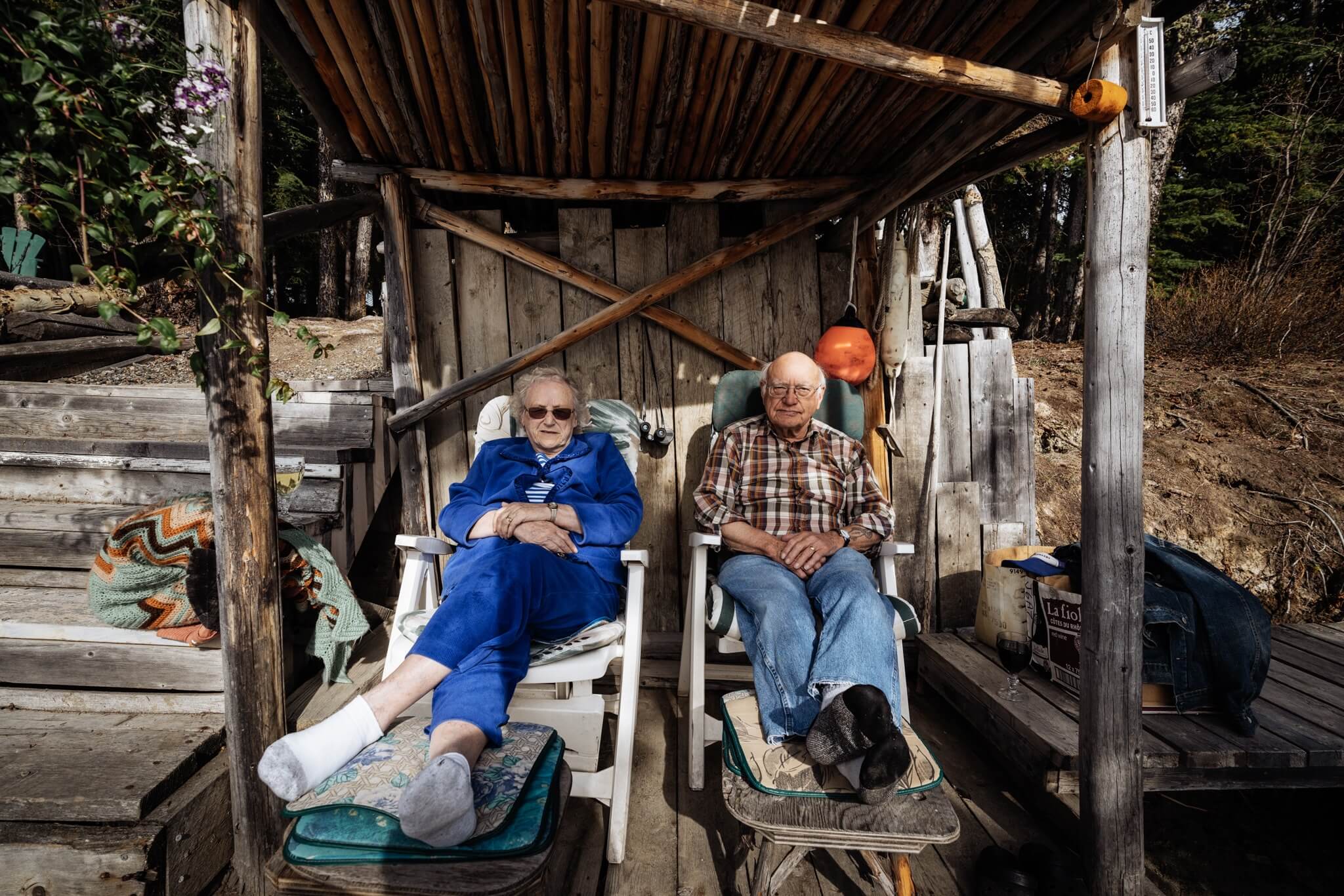 July 2019, Canada: My hosts Monica and Ulli from Germany have lived in the Yukon for three or four decades. I camped with them for a week. 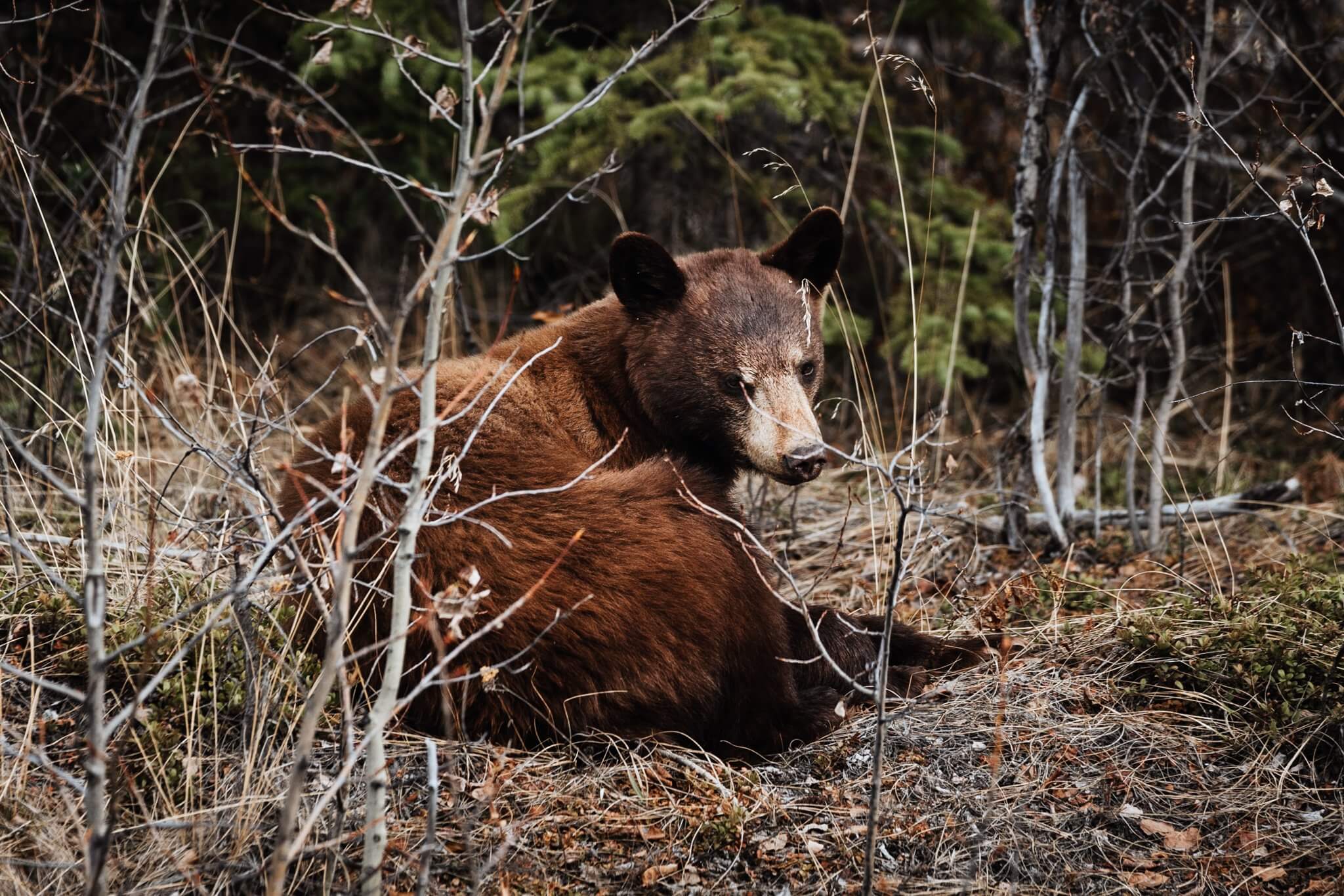 July 2019, Canada: A not-so-shy bear on the road in British Columbia.

DEADHORSE, ALASKA – THE END OF THE ROAD.

Here, at this sign, my bike comes to a gentle stop. The bike computer shows that I have reached the destination of my tour at latitude 70°21’N. In 3 years, 7 months and 10 days one I have covered a total distance of 33.105 km. 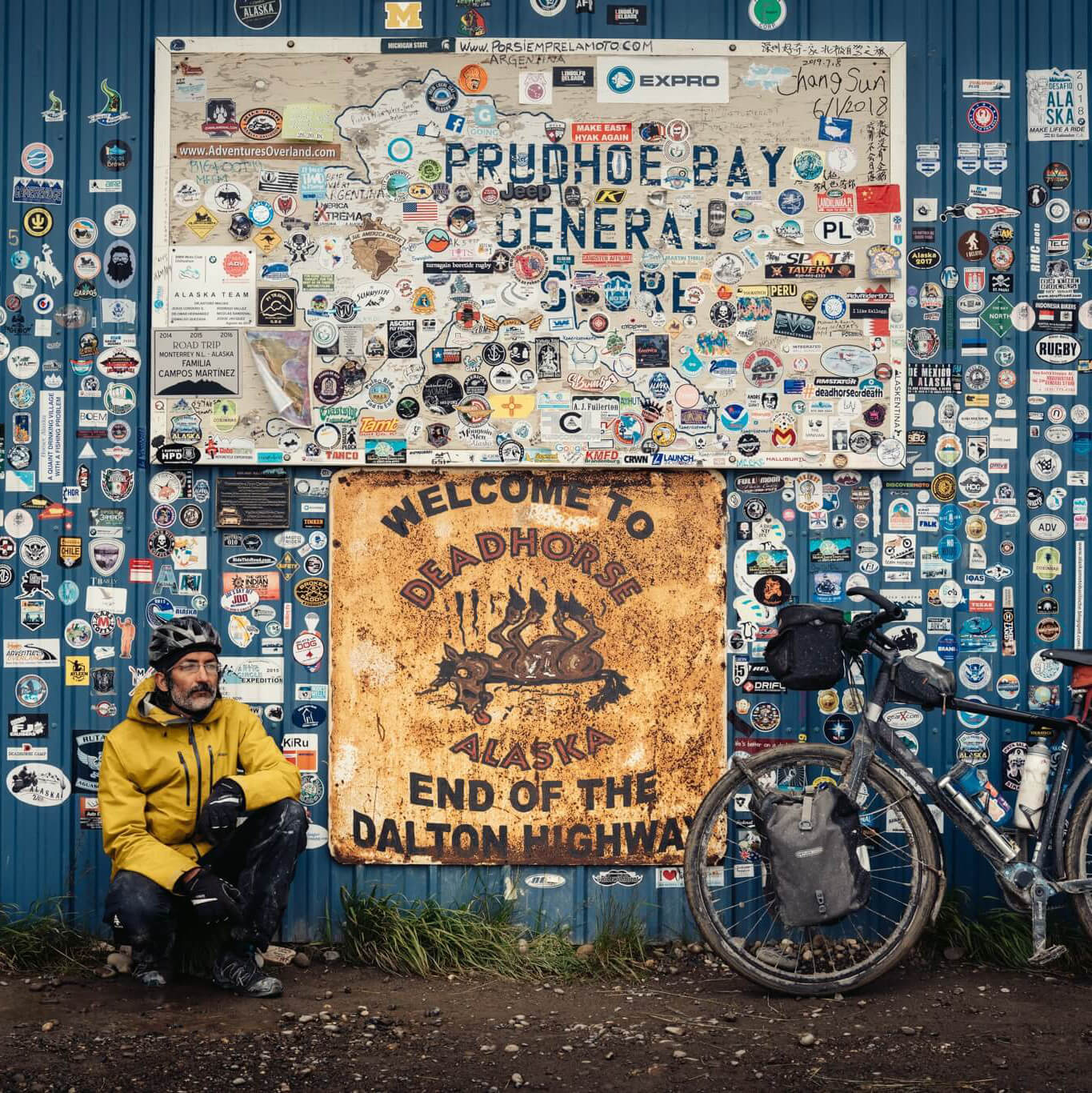 August 23, 2019.
Cold Arctic wind stings my face as I navigate the bicycle on a muddy road while looking for familiar faces in an unfamiliar place. My eyes scan and fixate upon a rusty sign “Welcome to Deadhorse, Alaska. End of the Dalton Highway.”
– Kamran Ali

© All pictures and videos are created by Kamran

Even more thrilling pictures and captivating stories of Kamran Ali on: